Home / News / A Hunt For The Finest Of Ingredients

A Hunt For The Finest Of Ingredients

A fusion of ingredients to bring forth an extravaganza. They say cooking is all about people. Food is the only universal thing that has the power to bring people together, no matter the diverse culture, lifestyle or belief from all around the world. Nurturing this thought, and as the year of 2020 comes along to become the ‘Visit Nepal Year 2020’, the Russian Center of Science and Culture in Nepal and Embassy of Russian Federation in Nepal are in collaboration with Hotel Radisson in organising the “Russian Kitchen Days 2020: A celebration of Russian Cuisine.” Hotel Radisson has launched yet another Food festival with Russian Celebrity Chef Andrei Zanim and Assistant Chef Maksim Vovna, wholly based on the Russian Food and Culture where they’ll be making delicious traditional Russian Dishes. In the span of two weeks, this event offers the perfect opportunity for everyone to admire and experience what the Russian culture has to offer through its music, dance, food and art. 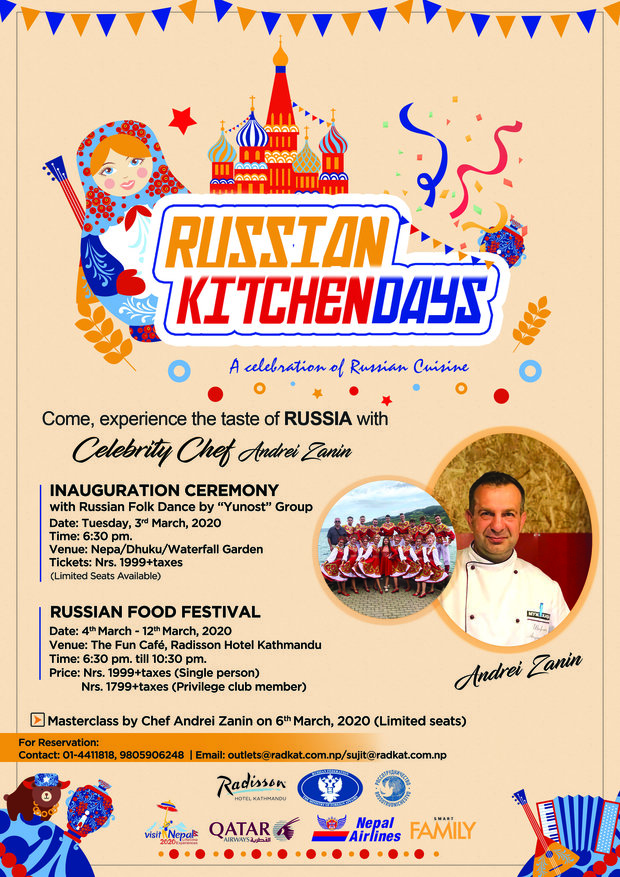 On the verge of starting the journey, the entire team went out for a shopping adventure through the bustling city of Kathmandu, on 28th February, exploring and discovering different places to understand what the different Nepalese food suppliers have in store for them. Joined by the Executive Chef Utpal Kumar Mondal, the chefs took off to their first destination, Subha Shinghal International, in order to surf through the lanes of the store and buy every grocery item they think they need for the festival. With already a vague reflection of what Nepali grocery shopping adventure is really like, the guest Chefs, Chef Andrei and Chef Maksim were already excited to know and explore more through the nook and corners of the culturally rich city of Kathmandu.

Continuing the journey, they watched the busy lives of the city pass by as they reached the famous Kalimati vegetable market. Stepping into a whole new world of conventional Nepalese lifestyle, Chef Andrei and Chef Maksim were immensely pleased and took their time to take it all in and admire the people and the place as they walked around, observing the appealing scatters of different vegetables through the centre. With the smell of the fresh green veggies, the business of the crowded fish market beside it and the homey taste of the local tea, they left the place with a bag full of groceries and a heart full of satisfaction. Carrying the shopping spirit for longer, they went ahead for more shopping, at a seafood centre. Everyone could see the happiness in chef Andrei’s face when it came to seafood. They again dug in through the edges and corners of the store and collected everything they needed with a clear overview of how diverse and fascinating Nepalese food culture really is.

With a breath of delight and gratification, the team is now on the verge to endure and extend the festival through the upcoming two weeks. Making a dedicated effort to bring back the event to its real purpose, the event formally begins at the Inauguration Ceremony on 3rd of March, at Nepa Dhuku Hall and Waterfall Garden, Hotel Radisson. They’re also planning to hold two masterclasses, one for the chefs from Nepal and the other favourable for any individual willing to learn about Russian Traditional dishes on 6th and 9th of March. The Russian Food Festival starts on 4th up to 12th of March at The Fun Cafe, Hotel Radisson. 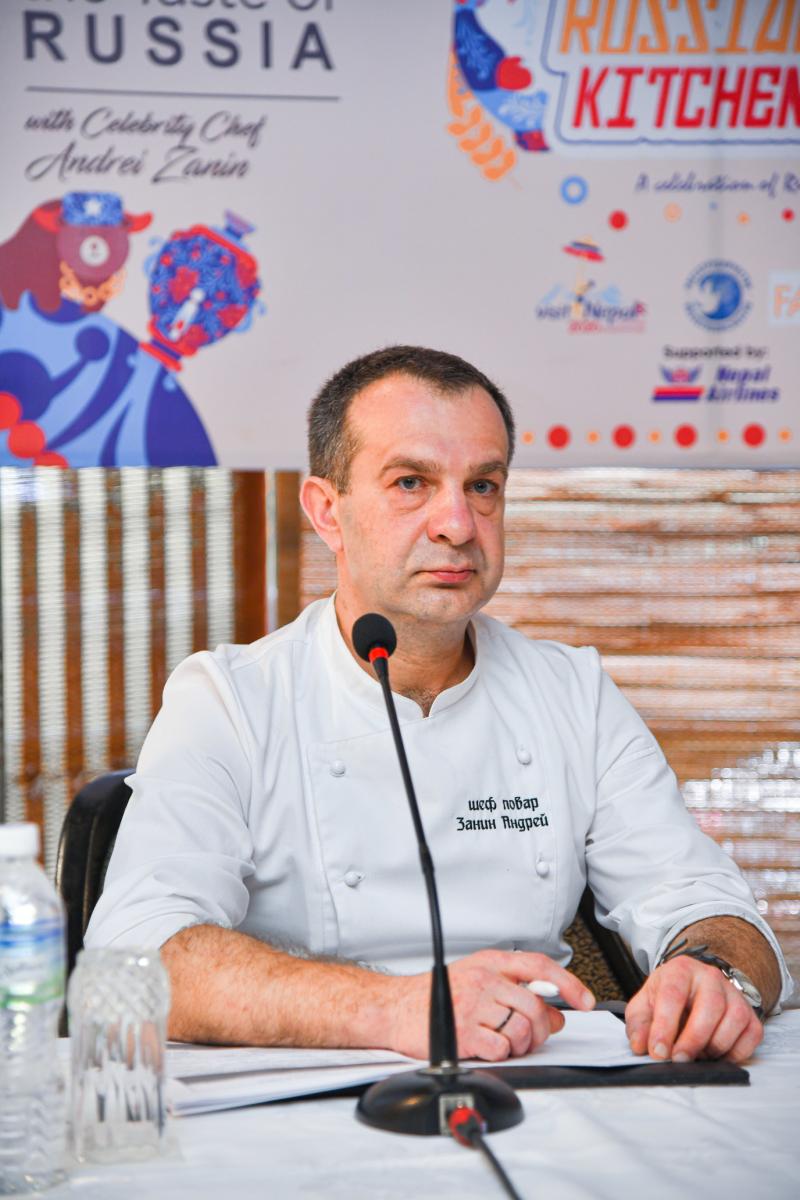 Widely known as ‘Andrei’s Onion’ in Russia, Andrei Zanim is a sous Chef, assistant of the main Chef. His royal dishes are the ones prepared using fish, meat and seafood. In Nepal, as a well-experienced celebrity Chef, he intends to formulate and coordinate the Russian Food Festival, also known as Russian Kitchen Day with his fellow Chefs.

Cooking for more than 5 years now, Maksim Vovna is an upcoming assistant chef from Russia. Vovna is more of a salad and appetizer cooker. For the festival, as they have come here for two weeks, they’ve brought some products from Russia and also bought some products, here in Nepal as well, for the Russian food festival.

Russian Kitchen Days 2020 is a celebration of Russian Cuisine, which shall be presented from the 4th- 12th of March 2020 at The Fun Cafe from 6:30 Pm - 10:30 PM. For this edition Celebrity Chef, Mr Andrei Zanin along with his assistant Mr Maksim Vovna and the team of Chef's at Hotel Radisson shall bring to the table a symphony of dishes representing traditional Russian Cuisine.